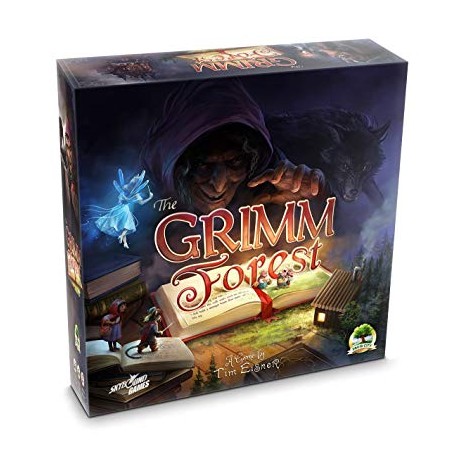 Can you outwit your friends and build three houses before anyone else? Seek help from legendary fairy tale characters and avoid the cunning creatures that lurk in the forest to become the greatest builder in the land! In The Grimm Forest, you are a niece or nephew of one of the 3 Little Pigs of legendary fame, competing to build a set of three houses quickly out of Straw, Wood, or Brick. Players make secret plans to travel to parts of the Grimm Forest to gather limited amounts of resources that are available there. The Game is played over multiple rounds, split between two main phases : Gather and Build. During the Gather Phase, you will move to one of the Gather Locations; there you will gather resources to use in your house-building efforts. If more than one Pig goes to the same location, you must share the resources found there, but if you end up alone, you get all the resources from that site. Players may choose to secretly play up to one Fable Card from their hand. By accurately deducing the actions of other players the correct Fable Card can be played to enhance the number of resources gathered by you or slow the process of building for others. At different points during the game, allies come out of the Grimm Forest to help players meet their goal through the Friend Cards, which grant them powerful, permanent abilities. Once everyone has selected the cards they want to play, the cards are revealed and the Pigs are placed on their chosen Location. Fable Cards are then played one by one following the order of activation. Once all cards have been played, players take or share their resources and place them on their Player Board, ready to be used in the Build Phase of the round. The first player to build three complete houses wins!