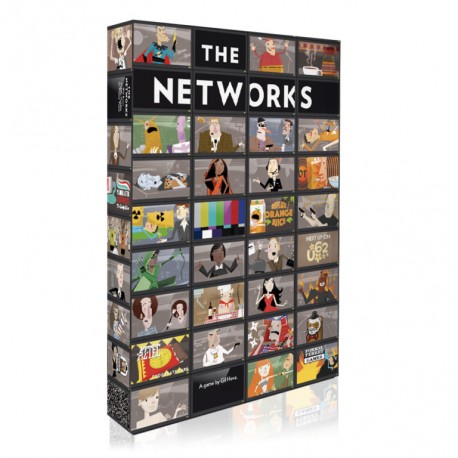 Welcome to the TV business!

You are the owner of a new television network. All you have are three awful public access shows, a small amount of cash, and endless ambition. Plus it looks like you’re not the only new TV network in town…

Can you snatch up the best Shows with the most popular Stars and the most lucrative Ads? Can you get enough Shows of the same Genre to make your network stand out? Can you best utilize the powers of the handy Network Cards?

Whose network will get the most Viewers and win the game?

The Networks is a tabletop strategy game from the designer of Bad Medicine, Battle Merchants, and Prolix, in which the players are all running competing for television networks. You’ll start from humble beginnings to amass the best-possible prime-time lineup and a solid archive of reruns. The game runs 60-90 minutes and is for 1-5 players. The challenge of the game is that your shows will require stars and ads. But some stars perform better on certain kinds of shows, and some ads perform better in certain time slots. You’ll be making all sorts of juicy, tricky decisions as you guide your TV network to the top!

In The Networks, you will start with three awful public access shows and some money. As the game goes on, you will be canceling these shows and replacing them with better and better shows.

Shows will have varying prerequisites of stars and ads; you’ll want to secure those before developing your shows. stars and ads have their own sets of conditions; they perform better on certain types of shows or in certain time slots.

Shows age each season. They usually plunge in popularity at some point, so you must be quick to replace them with fresh new shows whenever you can.

The Networks rewards planning and strategy, but you can’t ignore the other players. They may beat you to the show you were planning on getting. Timing is crucial! 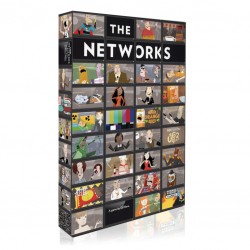 Welcome to the TV business!