By hurling you into a life-and-death combat for the Traxis sector, Warhammer 40,000: Conquestforces you to secure your hold over the sector’s key planets. You must balance the concerns of present battles and future conquests as your warlord leads your armies to glorious victory.

To claim the Traxis sector, you must conquer or die.

Worlds for the Taking

Each round of Warhammer 40,000: Conquest begins as you and your opponent deploy units to planets arrayed between both players. Units represent the military power of your faction and are your principal means of conquest. During the deployment phase, you and your opponent alternate spending resources to deploy army units to various planets, allowing you to establish a presence on many planets at once, while preparing for current and future battles. Planets are the key to victory in Warhammer 40,000: Conquest. By securing critical planets, you establish your dominion of the Traxis sector, moving toward victory. Each planet possesses one or more symbols in the upper left-hand corner, identifying that planet’s strategic value, whether military, economic, or technological. For example, Elouith possesses only the Tech symbol, whereas the strategically important forge world Iridial has all three symbols: Material, Strongpoint, and Tech. These symbols have no inherent abilities, but the first player to conquer three planets that share a common symbol claims dominion of the sector and wins the game! Deployment ends when you and your opponent both choose to not deploy more units. In the command phase, both players secretly choose a planet to feel the wrath of your warlord and his armies by using the servo-skull dial. Your warlord and any troops at your headquarters immediately transport to the chosen planet. Determining where your warlord’s armies will assault is a vital consideration. Since the warlord comes with any troops you have at your headquarters, his presence is powerful, but he can only commit to one planet each round. By bringing your warlord to the first planet, you may have the upper hand in a pitched battle, but by using your warlord to attack a different planet, you can force a fight and potentially destroy your opponent’s units on that planet, securing an advantage there.

The Struggle for Supremacy

After both warlords have arrived at the chosen planets, the command struggle takes place at each planet, representing a strategic battle for resources and influence at a planet. Every unit has a number of command icons, and the sum total of these icons determines the winner of the command struggle. The presence of a warlord, however, overrides the concerns of lesser units, allowing you to instantly win the command struggle at a planet where only your warlord is present.

Battle is inevitable in the grim future of the 41st millennium and Warhammer 40,000: Conquest. Once the command struggle resolves at each planet, battles occur at the first planet, and on any planet where a warlord is present. Winning a battle at the first planet allows you to capture the planet, bringing you one step closer to victory. Battles at other planets allow you to establish footholds for future battles or crush your opponent’s troops that have massed on another planet.

At the onset of a battle, the player with initiative begins by exhausting one of his units to strike. Every unit has two numbers on the lower left border of its card. The top number is that unit’s attack power, while the bottom number is the unit’s hit points. The Soul Grinder, for example, has an attack power of four, and six hit points. Whenever you exhaust a unit to strike, you may select one of your opponent’s units as the target of your attack. If you attack using the Soul Grinder, you would deal four damage to a chosen enemy unit at the planet. But battle is unpredictable in the Traxis sector, and your opponent can always react. A host of special abilities, keywords, and event cards allow both players to modify combat. In addition, attacks can be shielded by discarding a card with shield icons from your hand to reduce the damage dealt to your unit. Battle is bloody and merciless in the Traxis sector. Once all ready units at the planet have been exhausted, every unit at the planet readies, and combat continues until one side chooses to retreat or is completely destroyed!

After a battle resolves, the winner reaps the spoils of war and has the opportunity to trigger the Battle ability of the planet. For example, winning a battle at Iridial allows you to remove all damage from a target unit. Whether you trigger the Battle ability or not, if the battle took place at the first planet, the winner claims the planet, and any warlords and army units present return to your headquarters to await future battles. Once all battles are complete, each player receives four resources and draws two cards, preparing them to deploy again.

Seven different factions compete for control of the Traxis sector inWarhammer 40,000: Conquest. Each faction occupies a niche in the game, with its own distinct playstyle.

The vast numbers and overwhelming firepower of the Astra Militarum make them a fearsome fighting force for the Emperor.

Ork warbands have always posed a dire threat to all that dare to oppose them. Brutal in battle, many Orks become stronger as they take damage, forcing their enemies into perilous situations.

Drawing on the Warp, the followers of Chaos swear allegiance to the Chaos gods. With powers that deal direct damage to enemy units, Chaos crushes weaker soldiers with ease.

Cruel and ingenious, the sadistic Dark Eldar seek to enslave the entire sector. Torture, sacrifice, and a host of captured creatures help the Dark Eldar enslave and conquer entire planets.

Utterly alien to all others, the Eldar possess strange and powerful technologies. Striking out from their craftsworlds, the Eldar use their great mobility to incapacitate enemy units.

Spreading throughout the galaxy in pursuit of the Greater Good, the Tau are fast and efficient in their conquest of worlds. Wielding experimental technology, the Tau use attachment cards to raise their soldiers to victory over other armies.

Even in the darkness of the far future, though, alliances can be forged. Each of the seven factions has its own place on the game’s alignment wheel, and this determines which factions might join you. When building a deck for your chosen faction, you may choose one of the two factions adjacent to your warlord’s to serve as your ally in your deck. For example, an Eldar deck may include cards from the Tau or the Dark Eldar, but not both. You may include any cards from your ally faction, except for certain cards designated as loyal. These cards represent especially loyal troops, unique tactics, or powerful wargear, and may not be included in other faction decks. 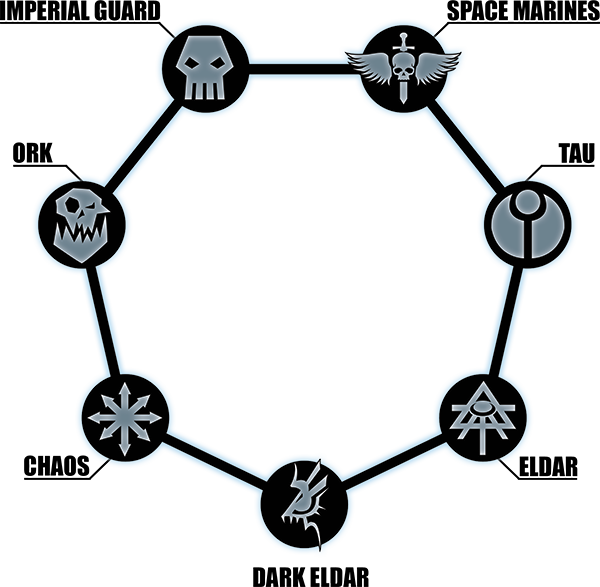 The alignment wheel illustrates which factions can ally together in one deck.

The possibility of an ally faction forces you to reevaluate how you face any opponent. If you see that your opponent has a Space Marine warlord, you still must determine if he’s playing a pure Space Marine deck, or if he has allied with either the Tau or the Imperial Guard. With so much possible deck diversity, you’ll face difficult choices no matter what deck you face in the battle for the Traxis sector. The foundation of every deck in Warhammer 40,000: Conquest is the warlord. After choosing a faction, you must select an in-faction warlord to lead your armies on the field of battle. Each warlord possesses a powerful special ability befitting the leader of your armies, and your choice of warlord also determines how many resources and cards you will hold at the beginning of the game.

In addition, each warlord comes with eight signature cards, some of which are duplicated. These eight cards are known as the signature squad, and they support the warlord’s special ability and preferred play style, forming the backbone of your warlord’s strategy and operations. When you build a deck, you will begin with those eight cards, then select additional cards from your faction and your ally faction to create a deck of at least fifty cards. Captain Cato Sicarius with four of the cards in his signature squad, some of which are duplicated.

Warhammer 40,000: Conquest offers you command of one of seven factions, battling for riches and glory in the newly discovered Traxis sector. Will your army rise triumphant from interplanetary warfare? Or will your name be forgotten as your armies fall in battle? Make your mark on the galaxy in this Living Card Game of strategy and martial tactics set in the darkness of the far future!

Wolfenstein The Board Game

Join the resistance in an alternate reality where the allies lost WW2  and... 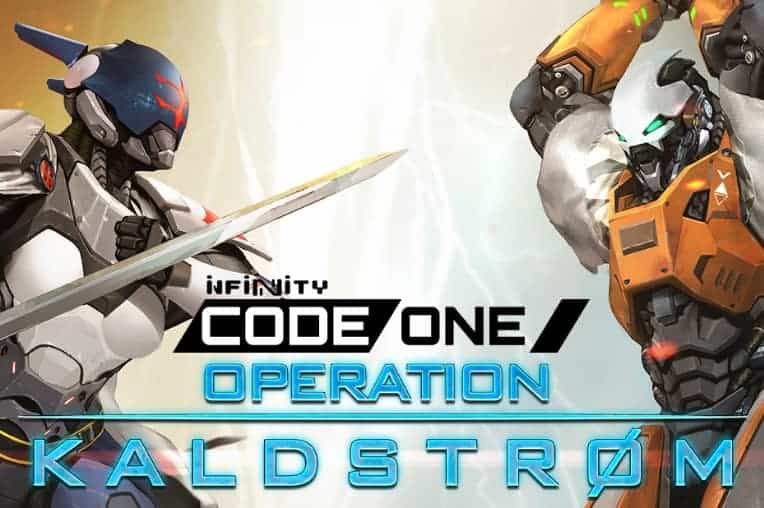