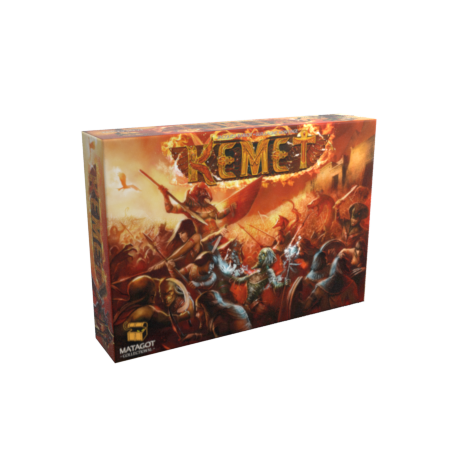 Embody a god of the Egyptian pantheon and lead your followers to war inô Kemet, a game of strategic battles and magical onslaughts for two to five players. You are tasked with claiming as much glory as you can, by raising your empire, conquering temples, and routing enemy armies in battle.

ãThis is the Eye of Horus. Place it in your hand that you may be sure of victory and that Set may fear you.ã
ô ô ô ãThe Pyramid Texts

In the mythic age of ancient Egypt, the gods arose and battled against each other to demonstrate their superiority over realms both mortal and divine. Human civilizations were mere pawns in these wars, fighting alongside massive creatures and exercising forgotten magics as the gods struggled for dominance.

Kemetô is a fast and tactical board game for two to five players that casts you in a mythological Egypt thatãs filled with battles and magic. Playable in only an hour, every game invites you to journey deep into this realm of magic and myth, commanding armies and unleashing your power as one of the gods of Egypt. To reign supreme over the pantheon, you must claim victory in battle, hold the temples that scatter the land, upgrade your forces, and raise your pyramids to the heavens! You may strike with the wind and fade back into the desert, but if you want to rule the black land along the Nile, youãll need all your cunning and a keen tactical mind to command your armies.

An Army of Thousands Is Led by One

As a god of ancient Egypt, you have legions of zealous warriors willing to fight and die for you. Using these soldiers and the prayers of your worshippers, you must claim victory points as you exercise your supremacy over your opponents. You can gain victory points in a number of ways, and to win the game, you simply need more victory points than your opponents. 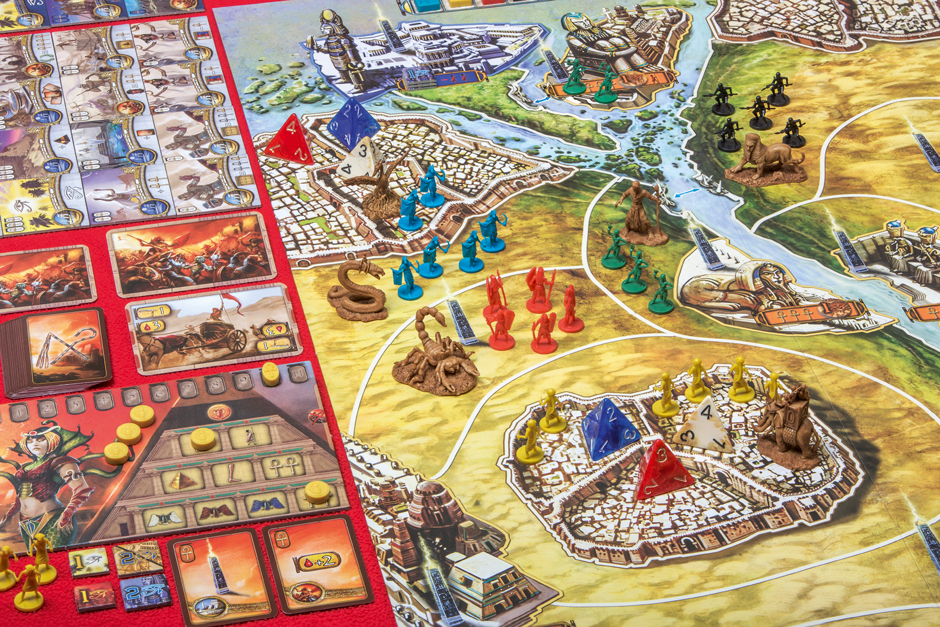 The primary way to gain victory points inô Kemetô is simply by attacking. If you attack an opposing army and win the battle with at least one of your units left alive, you claim a permanent victory point! The other primary way to gain new victory points is to control the temples scattered across the board. As long as you hold a temple, you gain a victory point for that temple, but if you lose it, you must give that victory point to your opponent who captured the temple. In addition, if you hold two temples at the end of a day, you gain a permanent victory point for exercising your dominion. Whatãs more, because theô Kemetô board is double-sided, youãll always have an even distribution of players and temples, whether youãre participating in a freewheeling battle against four opponents or going head-to-head with a single foe.ô 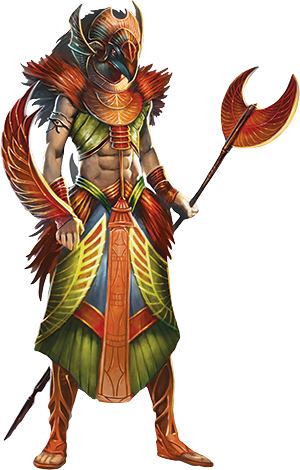 In your constant quest to gain victory points, you have five actions to spend every day, and you and your opponents take turns choosing actions by placing action tokens on your player boards. Each playerãs individual board displays a menu of nine actions, arranged in a pyramid with three levels. You have five actions to spend each day, and you can trigger any of the actions shown on your board, but at the end of the day, you must have at least one action token on each level of the pyramid.

Each of the actions on your board offers a different advantage:

Each turn, youãll have to make careful decisions about which actions to take, but because youãre forced to place one action token on every level of the pyramid, you'll soon be mustering new warriors and leading your armies onto the field!

Inevitably, your armies will clash with your opponents' on the field of battle. Whether youãre fighting in the depth of the desert or before the doors of a mighty temple, youãll need to call upon brilliant stratagems and unexpected tricks to win the day.

Battles inô Kemetô are resolved entirely without luckãonly your planning and your cunning can determine the outcome. Each player has six identical Battle cards, and in each battle, you and your opponent will consider your options and choose two Battle cards. One Battle card is discarded without effect, and the second card is played in the battle.ô 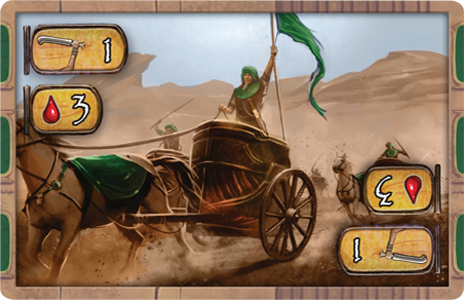 Every Battle card has a strength value, which is added to the number of units you have in the fight. This number is crucial, because whichever player has the highest strength wins the battle. Many Battle cards also have a damage value. Whether you win or lose the fight, your opponent must kill a number of units equal to your damage value. This forces your opponent to recruit these units again, and importantly, if you can kill all of your opponentãs units in a battle as the defender, he wonãt gain a victory point for winning. Some Battle cards also feature a protection value, which reduces your opponentãs damage value. If you want to ensure that your units survive the fight, choosing a Battle card with a high protection value is crucial.ô

Complicating your battles are Divine Intervention cards. You draw one of these cards at the beginning of every round, and they can be played to give you a variety of effects. Some can be played to destroy an enemy unit or give you more Prayer Points. Others are played in battle, suddenly boosting your strength or the amount of damage you deal. You may save your Divine Interventions for a crucial battle or use them to gain an immediate advantage, but either way, they give you more options for affecting the battle and overwhelming your foes.

On the Path of the Gods

Each player starts a game ofô Kemetô with identical resourcesãthe same number of units, Prayer Points, and pyramids. However, your strategies may quickly diverge from your opponentsã as you purchase new Power tiles.ô 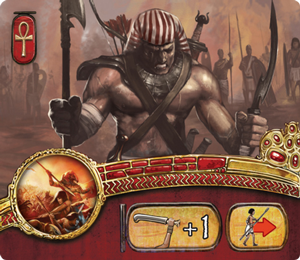 There are three distinct colors of Power tiles: red, blue, and white. Each color consists of sixteen tiles, and you can purchase these tiles by spending the appropriate number of Prayer Points from your reserves. Every Power tile gives you unmistakable and unique advantages in coming fights. You may buy Charge! to give your armies one additional strength whenever you attack, or you may support the Priests to dramatically increase the rate at which you accumulate Prayer Points. Each color of Power tile broadly reflects a certain strategyãred tiles are offensive and focused on battle, blue tiles are defensive and increase your movement, and white tiles amplify your resources and give you more control over your enemiesã actions.ô

Whatãs more, some Power tiles let you acquire powerful creatures that take the battlefield alongside your units. Each creature features a beautifully sculpted plastic figure, and they offer powerful bonuses to the army theyãre associated with. The Ancestral Elephant, for example, increases the strength, protection, and movement values of its army, while the Sphinx provides you with a permanent victory point in addition to increasing the strength of its army.

Thereãs more to acquiring new Power tiles than just spending Prayer Points, however. You must also possess a pyramid of the appropriate level. Each player has three pyramids in his city, and their colors match the three colors of Power tiles: red, blue, and white. If you want to purchase a tile of a certain level, you must possess a pyramid of that level that matches the tileãs color. In other words, if you want to buy a third-level blue Power tile, you need a blue pyramid at level three.ô

More than this, raising your pyramids can help you attain victory more directly. For each of your pyramids at level four, you gain a victory point. These points are not necessarily permanent, though. If your opponent invades your city and captures your pyramid, he takes the victory point from you!

A New Order Is Rising

Horus. Bast. Wadjet. Sobek. Anubis. Who will rule the land that lies along the Nile River? Take the part of a god from Egyptian mythology and lead your armies into battle. Only your cunning and your keen grasp of tactics will bring you victory inô Kemet!ô 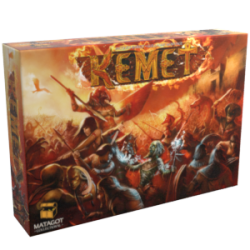 Embody a god of the Egyptian pantheon and lead your followers to war inô Kemet, a game of strategic battles and magical onslaughts for two to five players. You are tasked with claiming as much glory as you can, by raising your empire, conquering temples, and routing enemy armies in battle.