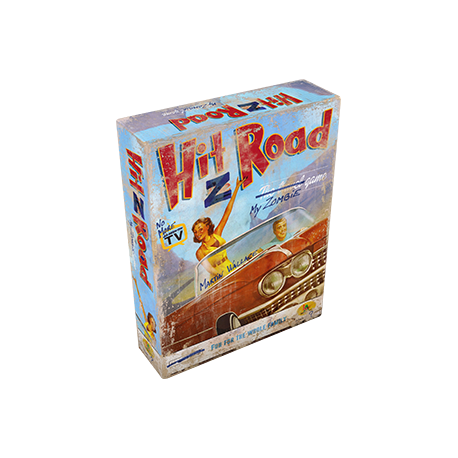 In Hit Z Road, you and your friends will see Chicago. You'll drive through Missouri, Kansas, Oklahoma, and Texas. You'll drive through small-town downtowns and witness the vastness of the American countryside. You'll eat at diners. You'll hit New Mexico and Arizona. You'll see the plains, the desert, and the zombie hordes…

Yes, the America of Hit Z Road is one of post-apocalyptic nightmare. But it's also one with a shiny Californian coastline yawning into an ocean that sparkles brightly in the sun at the end of your journey… if you can survive.

Part survival game, part horror story, Hit Z Road boasts tension and irony in equal measure as you hunt for gas and scavenge for ammo in order to blast through zombies and barrel down the highway to L.A. In the end, though, you don't necessarily have to be faster than the zombies; you just have to be faster than your friends.

You're in for One Heck of an Adventure

From Chicago through California, your road-trip becomes more and more difficult as the zombies devour and zombify everything else along the way. Accordingly, Hit Z Road divides your travels into three stages of increasing lethality.

Your travels are represented in the game by a deck of adventure cards, which are divided into stages one, two, and three at the beginning of the game. Each stage is shuffled, and then the third stage is placed at the bottom of the adventure deck, covered by the cards for stage two, and then topped by the cards for stage one. Each round, as you flee the zombies that want to eat your brains, you and your friends (who are also your rivals) will lay out several pairs of adventure cards.

Then, on your turn, you'll encounter one of these pairs of adventures, starting with the left-most card. First, you'll gain any gear indicated by the icons in its upper left corner. Then you'll encounter any text on the card. Finally, you'll battle any zombies the card indicates. Survive, and you'll continue on your way to the second card where you'll once again gain items, encounter text, battle zombies, and claim the victory points for the cards you've encountered.

You keep doing this round after round, even as your band of survivors starts to die off in frightful combats and tragic accidents. Your goal is to make it all the way through the deck of adventure cards. Do so, and you've arrived at L.A. If you're the only player whose band of survivors manages to make it to L.A., you win. Otherwise, you and your fellow survivors compare the victory points that you have earned from the adventures you encounter. The player with more victory points gets to claim the better road-trip horror story and wins!

Leave Your Friends to Die

Now, one of the most remarkable truths about Hit Z Road is that not all adventure cards are equal. Some force you to choose between bad, horrible, and instant death. Others give you free gas, free bullets, and clear, zombie-free roads. Because you shuffle all these cards together and lay them out at random, you'll frequently find the table littered with pairs of adventure cards of wildly varied difficulty. 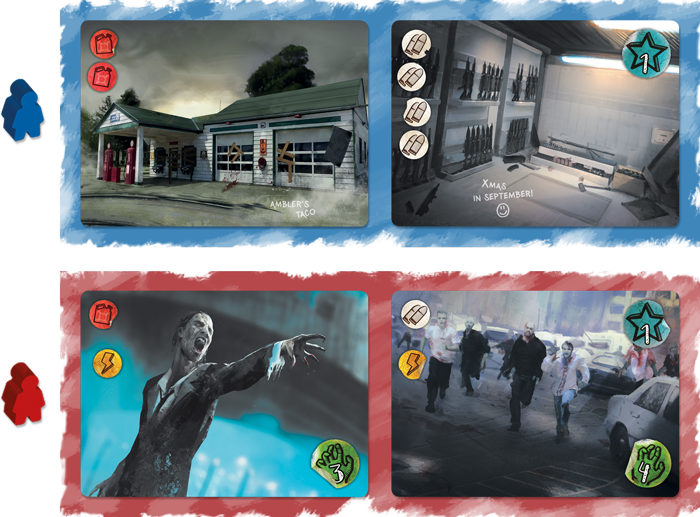 So we imagine that right now you may be asking, "How do I get to be the one making the choice?" The answer is that you earn it by outbidding your rivals in the auction that takes place at the beginning of each round. You start the game with twelve combat tokens—four gas, four adrenaline, and four bullets. During the auction, you can bid any number of these tokens for the right to choose your route through the adventures ahead of your rivals.

Of course, the catch is that you no longer have those tokens available for any upcoming combats, and since you won't know which adventures you'll find until after you bid, you might find yourself bidding just enough to win second or third position. Just so long as you aren't the last player who gets the adventures that spawn hordes of undead that grow in strength each time you shoot at them…

Doing Battle with the Walking Dead

In the gruesome—and somewhat inevitable—event that your route carries you into combat with a pack of zombies, you have two options: 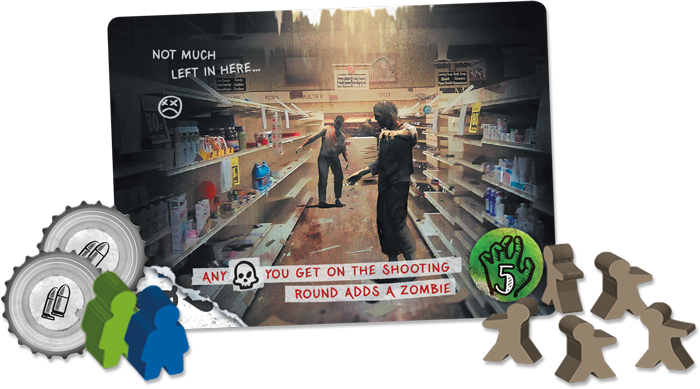 Because you're quicker than the zombies—and because your survivors have taken the effort to equip themselves with handguns—each combat opens with a single round of gunfire. That is, your combat opens with gunfire IF you have any bullets to spend. Each bullet you spend toward this round of ranged combat allows you to roll two combat dice. This is a good way to pick off the zombies before they can fight back, and if you get really lucky (or you just have fantastic aim), you can potentially explode the whole pack of zombies at a distance, risk-free.

More likely, however, is the scenario in which you pick off one or two, maybe even three, zombies, but the rest just keep pushing forward, and you have to engage them in hand-to-hand combat. At this point, you roll one combat die for each of your survivors. Each target result destroys a zombie; each skull result kills one of your survivors.

The result is that you'll find your adrenaline invaluable, just like your bullets, and your gas… Except that you need to bid them in the auction if you don't want to get stuck driving down all the wrong alleys in the wrong parts of town.

In the end, Hit Z Road is a fast-paced and aggressive adventure game that's equal measures survival and racing. There’s a whole world of zombie apocalypse headed your way, but that’s no reason to cancel your road trip… It’s bound to be the adventure of a lifetime (just be sure it isn’t yours)! 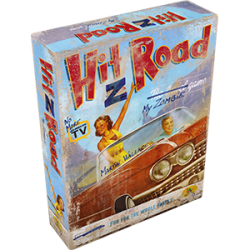